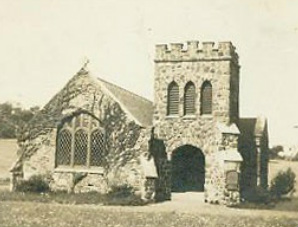 Our History: The Congregation
Millington was a bucolic resort town with bungalows by the Passaic River and a thriving quarry and farms in the late 1880s when a group of summer people and year-round residents decided that the area needed its own Episcopal church.

In 1904, Bishop Edwin Lines of the Diocese of Newark began to meet with the group from Millington to plan the new church. One of the first visionaries and spokeswoman for All Saints' was Mary Hudspeth Benson, the Jersey City social reformer and witness for the prosecution at the Lincoln assassination trials. Bishop Lines called together a planning group that included some of the most prominent names in turn-of-the-century Millington as: Mrs. Benson (also mother of  federal judge and state Senator Robert Hudspeth), Mr. Sidney Ogden, Mr. Duane H. Nash (he built the train station in Millington and was a partner in the Acme Harrow company with Frederick Nischwitz), Mr. Frederick Taff, Miss Mathilde Schumacher, her brother Anthony and the acclaimed maritime artist Mr. Milton J. Burns. With the All Saints' project coming at the start of his episcopacy, Bishop Lines was eager to make the new mission a test case for some of his ideas about building new churches.  The proximity to new public transportation, areas of growth and the importance of adequate space for a children's Sunday School were all important to him.

Bishop Lines asked the Rev. Thomas Conover of St. Bernard's in Bernardsville (in the Diocese of New Jersey) to provide pastoral supervision for the mission. Later, Father Conover also established St. Luke's, Gladstone and St. John on the Mountain, Bernardsville, as well as helping to reinvigorate St. Mark's in Basking Ridge. Today these five parishes are known as the Conover churches.

Fund raising began in the community and land was donated by Frederick Taff of Millington. True to Bishop Lines' vision and commitment to young people, the children in the community held a birthday party for the new church in September of 1904 and raised $150.  They later raised $500 to contribute to a diocesan mission fund, in gratitude for monies the diocese had contributed to All Saints' in its first year. 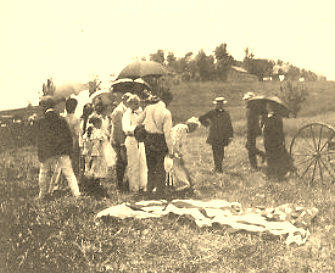 Groundbreaking - July 4, 1905
Brothers Frederick S. Stone and William E. Stone of New York were the architects who designed the building. The structure was completed in June 1906, a year after ground was broken. The first service was held on May 27, 1906, with a luncheon reception at the Millington Field Club House up the hill from the church (there being no Parish Hall) and the church was formally consecrated on September 29th of that year - the Feast of St. Michael and All Angels.  The first officers of All Saints' were Mr. James E. Bathgate, jr - Warden, Mr. G.H. Whittle - Clerk, Mr. Duane Nash - Treasurer.  Other local family names connected to All Saints' at its founding include Moody, Schmidt, Hall, Thomas, Compton, Kelley, Thompson and Link. In 1913 a Rectory was built on the property, designed by Frederick Kelley and built by Nicholas Thomas.

All Saints' continued as a mission congregation until 1949, when it became a parish, able to fully fund its ministry.  The priest at that time was the Rev. George E. Rath.  It was during his tenure that All Saints' built a Parish House (1950) and the church was enlarged to its present size (1957).  In 1964, after twenty-three years as All Saints' last Vicar and first Rector, Father Rath was called to be the Suffragan (assisting) Bishop of the Diocese of Newark, later becoming Diocesan Bishop.

During the early 1970s, as women's leadership in the Church became more recognized, two of the first four women in the Diocese to serve as licensed chalice bearers at Communion services were from All Saints' - Martha Wyatt and Audrey Roller.  In September 1973 Nancy Hatch Wittig, a teacher in the parish nursery school, was ordained a transitional deacon at All Saints'.  Then in July 1974 Nancy was in the first group of women ordained as priests in the Episcopal Church in an historic service at the Church of the Advocate, Philadelphia, PA.